Former Kano State Governor’s Aide, Salihu Yakasi Tanko, alias Dawisu, has reacted to President Muhammadu Buhari’s harsh warning to individuals damaging government infrastructures in Nigeria.
Following a meeting in Aso Villa, Abuja, with INEC Chairman Mahmood Yakubu and other electoral commissioners, President Buhari turned to Twitter to deliver harsh warnings about a series of attacks on INEC facilities, particularly in the country’s south-eastern region.
The president remarked in a tweet that individuals who wish to destabilize the system will soon face the shock of their life.
The message has already provoked controversy on social media, with Dawisu voicing his displeasure with the statement, claiming that president Mohammadu Buhari is not the person in charge of his Twitter account.
“We’ve given them enough time,” he said, and someone signed it with the President’s name and posted it on his official Twitter profile. This tweet has astonished and sickened me.
See twit:- 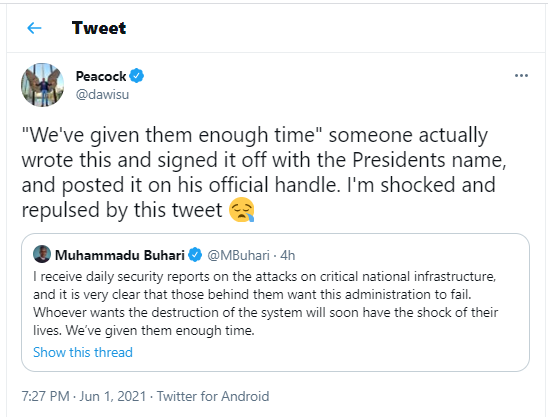